Life in the wilds of western Pennsylvania and Ohio during the late 1700s was one of retaliation. Whites encroached on the lands of the Native Americans, some of whom would raid the white settlements. After a raid, there would invariably be retribution against Native Americans. And the cycle would go on and on…

The tipping point in this tale was a horrific event in the settlement of Gnadenhutten, in present-day Tuscarawas County, Ohio. Moravian missionaries had converted many families of the Delaware Indians to Christianity. These Delaware tried to remain neutral between the British and the American colonists. In 1781, after a series of raids in Pennsylvania (perpetrated by others), the British ordered the Delaware to leave Gnadenhutten and move to Sandusky in northern Ohio.

Raids from sides continued. In early 1782, a militia led by David Williamson formed in Fayette County, Pennsylvania with the purpose to retaliate against the Delaware. Their target: Gnadenhutten, where some Delaware had returned to gather crops they had left in the fields the autumn before. On 8 March, despite the fact that these Delaware had not been involved in the raids, the militia rounded up 98 Delaware – men, women, and children – and held them overnight. The next day, the militia killed 28 men, 29 women, and 39 children. Two Delaware lived to tell of the massacre.[1]

“The object of your command is to destroy with fire and sword, if practicable, the Indian town and settlement at Sandusky, by which we hope to give ease and safety to the inhabitants of this country; but if impracticable, then you will doubtless perform such other services in your power as will in their consequences have a tendency to answer this great end.”[2]

Colonel William Crawford was elected to lead the militia. Along with him were four men elected majors: David Williamson (of the Gnadenhutten massacre), Thomas Gaddis, a man named Brinton, and John McClelland, my fifth-great-grandfather. 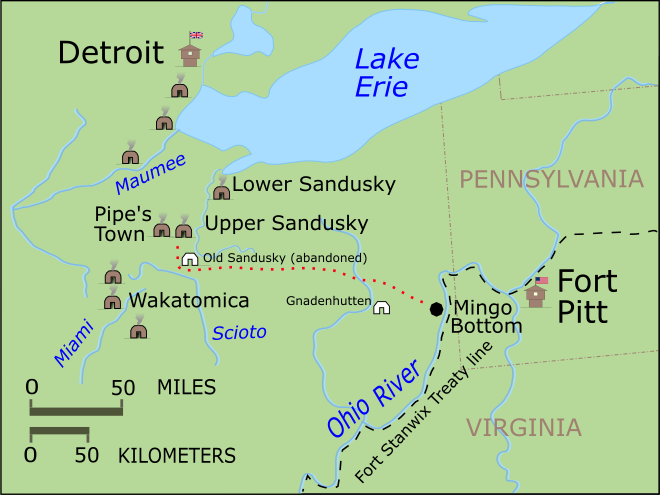 Map of the Crawford expedition made by Kevin Myers. Downloaded from Wikipedia and used under Creative Commons license.

Crawford’s militia of 480 men began their expedition on 25 May. Their plan was to reach Sandusky undetected and have the element of surprise on their side. The militia didn’t spot any Delaware until after they camped at the ruins of Gnadenhutten on 28 May. After that, the expedition sped up to reach Sandusky before the Delaware scouts could pass along the news of the advancing force.

Just after noon on the 4th of June, Crawford’s troops reached the village at Sandusky and were poised to strike, except that there was nothing to strike against. The village was deserted. Not only had the scouts arrived before the militia did, Crawford’s expedition had been watched ever since it crossed the Ohio River a week and a half before. Their arrival was anything but a surprise.

Crawford and his majors had a decision before them. Should they try to find the Delaware (and likely the Shawnee and Wyandot) or retreat to Pennsylvania? The vote: Press on.

None of them would have predicted the consequences.

A Coming Together and Coming Apart

Crawford’s men turned south to seek the Delaware. At the same time, the Delaware led by Capt. Pipe, followed by a band of Wyandot, were heading north. The meeting was inevitable. Crawford’s men were eventually out-flanked, but the terrain evened the match, with the militia holding a grove when evening fell. Indeed, Crawford and his men felt optimistic.

What Crawford and his majors didn’t know was that the Delaware and Wyandot would soon be joined by the Shawnee and a detachment of British. Weakened by the fighting on the 4th, Crawford’s force found itself outnumbered by the afternoon of the 5th.

With British and Wyandot forces to the north of them and Delaware and Shawnee to the south, Crawford realized that he could not battle his way out, and he issued the order to retreat south with the goal of reaching the Ohio River. The militia held its own until evening began to fall and the retreat started in earnest.

John McClelland and his unit led the forces south. The Delaware and the Shawnee were upon them almost as soon as they started. Crawford’s three other divisions scattered.

It’s here that Ohio history classes focus their attention on Col. Crawford. As the retreat started and forces surrounded the expedition, Crawford’s command scattered, leaving Crawford and a few of his men in the forest. The Delaware captured them two days later. What happened next was the true retaliation for the Gnadenhutten massacre. Crawford, being the leader of the Sandusky expedition, was to be made an example of. Over the next two days, he was beaten and tortured. On the morning of 11 June, he was striped naked and further tortured while tied to a fiery stake. After several agonizing hours, Crawford finally died.

Crawford was not the only white man to die in the expedition. Reports put it anywhere from 50 to 100. Among the dead was John McClelland.

McClelland was in charge the retreat. Normally, the head of a retreat would be a safe position, but with Crawford’s militia being completely surrounded, there were no safe positions. McClelland was wounded trying to lead his unit to safety. Perhaps understanding the severity of his wounds, he gave his horse to John Orr, telling him to “clear himself.”[3]

It isn’t known exactly when or how McClelland died. John Slover, a scout with the expedition, had been captured by the Shawnee. On 11 June, he was taken to a Shawnee village where they showed him the bodies of three white men. Slover recognized William Harrison and William Crawford, (Col. Crawford’s son-in-law and nephew). Slover couldn’t positively identify the third body, but believed it to be that of John McClelland.[4]

The government of Pennsylvania paid special pensions to some of the families of the lost men. John McClelland’s estate received eight pounds, seven shillings, and six pence.[5]

The thing about retribution and retaliation is that it is inexact. David Williamson, the man who led the militia at Gnadenhutten – the travesty that set so much of this in motion – made his way safely back to Pennsylvania. 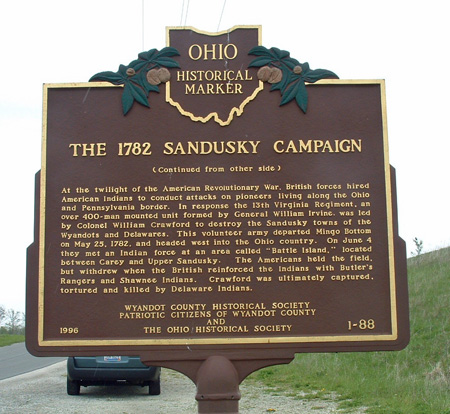 Although the Fayette County, Pennsylvania county history and the Butterfield account refer to it as the Sandusky expedition, the events took place near present-day Upper Sandusky, not the present-day town of Sandusky, which is on Lake Erie.

[2] History of Fayette County, Pennsylvania, With Biographical Sketches of Many of Its Pioneers and Prominent Men, vol. 1 (Philadelphia: L.H. Everts, 1882), p. 94. [NOTE: Pages 86-114 cover early raids by and against Native Americans, the Gnadenhutten massacre, and the Crawford expedition.]

[3] Butterfield, C.W. An Historical Account of the Expedition Against Sandusky Under Col. William Crawford in 1782 (Cincinnati: Robert Clarke, 1873), p. 221. [Available on Internet Archive.]

18 thoughts on “Retaliation on the Ohio Frontier: John McClelland (52 Ancestors #9)”