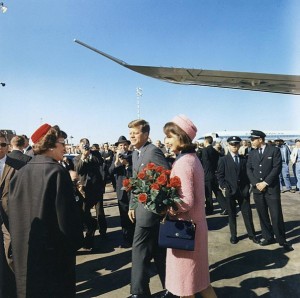 All this week, people have been asking the question “Where were you when you heard Kennedy was killed?” Mom was at home. Dad had the later shift at his service station and was getting ready for work. The milkman (yes, the milkman) had just stopped at the house, making his delivery, when the news broke on TV. Mom and Dad invited the milkman in to watch the news with them. Mom remembers Walter Cronkite breaking down when he announced that the President was dead..

As for me, I have no memories of it. Not because I was too young to remember. I wasn’t born yet.

People have expressed almost sadness that I missed this key event in the nation’s history. On the one hand, it would be interesting to be able to carry on a conversation comparing notes of “where were you.” But on the other hand, there are lots of key events that I — and a lot of my friends — have missed. Pearl Harbor. The 1929 Stock Market Crash. Lincoln’s Assassination. Fort Sumter. The Treaty of Ghent. Washington’s first inauguration. Lexington and Concord.

I look at my great-niece and great-nephews and realize that events that I do remember vividly — things like the space shuttle Challenger and 9/11 — are things they they will only hear about from others. They have no memory of them.

9 thoughts on “I Have No Memories of JFK, and Why That Matters”