Central Ohio isn’t known for its winter sports. We usually don’t have enough snow on the ground long enough to do anything with it. So when there was good snow cover one Saturday morning when I was 7, my dad decided to take my middle sister and me sledding. It was the first — and nearly last — time I was ever on a sled. 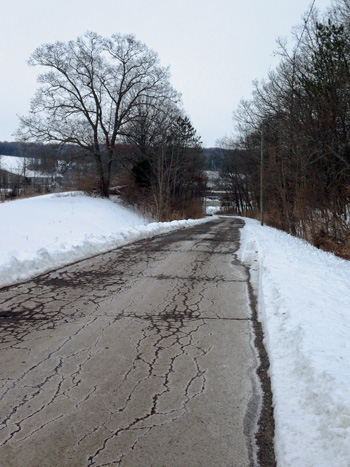 The service road at Hoover Dam, February 2014. When snow covered, it really is a good sledding hill. Just watch out for the curve.

It seemed that every other family in Columbus had the same idea that Saturday morning. Every hill we went to was packed with snowsuit-clad kids carrying sleds. (Central Ohio also isn’t known for its abundance of good sledding hills.) At last, we found a hill that was untouched: the service road at Hoover Dam.

It is a really nice hill. It goes from the parking lot all the way down to the base of the dam. (I’m not sure if there was a “No Sledding” sign there then like there is now.) Picture the road with snow on it and you’ll see why it was so appealing.

There was just one problem: That nasty curve in the road. Remember, I’d never been sledding before, so negotiating a curve wasn’t something that Dad was comfortable letting me try, even with guardrails on both sides. Especially considering that the hill to the left wasn’t there in the early 1970s; it was pretty much a tree-filled ravine.

Getting a grown man and his 7-year-old daughter on a tiny sled isn’t the easiest thing in the world. Finally, we situated ourselves sitting up, bobsled-style, with me in the front and Dad in the back. Dad was going to steer using the ropes that were attached to the front of the sled. (Looking back, I don’t know why we thought this was a good idea.)

My sister started down the hill first. Then Dad and I pushed off. It was exhilarating. The crisp winter air hitting our faces, the butterflies in our stomach when we hit a bump… and then, the ice.

There was a patch of ice at the top of the curve. My sister had managed to miss it, but Dad and I hit it square on. We went out of control and straight into the guardrail. Without it, we would have gone down the ravine. Instead, Dad and I were pinned under the bottom rail.

Dad’s legs took the brunt of the impact. It is amazing that he didn’t break his legs as we went under the guardrail or his hand from shielding me from the collision.

My sister made it back up to us just as we were dislodging ourselves from under the guardrail that had saved us. Later, she told me that all she could think when she saw Dad was, “Oh God. I only have my temps. Please let him be alright so I don’t have to drive home.” (We’ve teased her about that ever since.)

After assessing the damage to ourselves and the sled, we decided that we had had enough sledding for one day and opted to go home. (Yes, Dad was in good enough shape to drive, much to my sister’s relief.)

The ride back home was quiet as the three of us thought about our misadventure. As we pulled in the driveway, Dad finally spoke. “Don’t tell your mom.” Really? My sister and I nearly tackled each other getting in the house first to do exactly that.

So as I watch the luge and skeleton on the Winter Olympics, all I can think of is my first time sledding… and how I’ll stick with curling.

2 thoughts on “My First – and Almost Last – Time I Sledded: Or, Why I’ll Never Be An Olympic Luger”