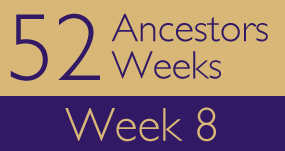 Congratulations to everyone who has made it to Week 8 and to those who are just getting started (and to everyone in between)! I’ve seen several people commenting that they’re “trying to catch up.” Remember – the goal is write something. It doesn’t have to be the definitive work on that ancestor. Don’t feel guilty about only posting a photo or only posting a couple of paragraphs. My motto: “Anything you write is more than what you had before.”

This week, we had both the serious and the silly. Larry Sanburg told about his ancestor’s involvement with the Underground Railroad. Susie Reynolds shared how her great-great-grandparents met.  Genohio isn’t quite her own grandpa, but she is related to herself. Cheryl Biermann Hartley wonders why her grand-uncle was wearing a dress.

One post that I’d like to bring special attention to is Cheri Daniels’ touching tribute to her Aunt Janet in “The Last Cup of Tea.” It’s a story of family dynamics, grief, and how one cup of tea really can make for a family story. (Thank you, Cheri, for allowing me to highlight your beautiful post.)

My contribution this week was about my great-great-grandfather George Skinner of Perry County, Ohio and why I’m glad he didn’t follow his siblings.