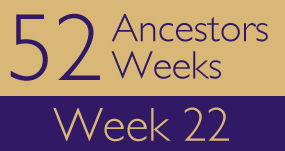 First, a bit of news about the weekly recap. For the next two weeks (June 11 and June 18), I will not be able to do the recap. (Don’t worry — it’s all good.) I have posts scheduled for those days and you’ll be able to leave a link to your posts in the comments. NOTE: if you’ve never left a comment on this blog, I suggest you leave one in the next day or two. Comments for first-timers are held for moderation, and I will not have time to moderate them after Friday afternoon.

Shelley Bishop shared why she went looking for an original record about her Virginia militiamen relatives and why she’s glad she found it. Find out what Myra Vanderpool Gormley’s grandparents have in common with chickens. (Myra, I couldn’t pass that one up!) Continuing on last week’s military theme, Pam Schaffner wrote about her relative Edmund B. Clayton of the 1st Maine Cavalry who died at Andersonville. My two favorite ancestor names this week: Niki Davis’ Lucy Jane Land and Jana Last’s Crecenciana Aurora Matus Villatoro.

My post this week was about my 3rd-great-grandfather Abisha Danison.

Diane’s memorial to her mother, Hélène, is beautiful. Diane – we are all so sorry for your loss.