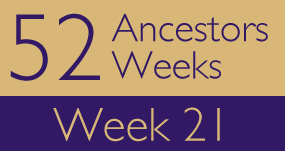 It’s been a crazied, hectic week…. again. That means that this recap is late…. again. This recap covers posts from May 21 – May 27.

Several bloggers featured military ancestors this week, including Judi Carroll-Thompson who featured her ancestor Julius Copeland of the 42nd U.S. Colored Troops. Dave Lucey wrote about his relatives Gilbert Stanhope and George Stanhope, both of the 1st Maine Heavy Artillery. Terri wrote about her cousin James Doyle Albey who was killed in action in Korea. Beth Gatlin shared stories and photos of her relative Ferdinand Constand Schneider, who was killed in World War I.

Tim Graham summed up the meaning of Memorial Day beautifully with his tribute to his relative Clyde C. Kitch, who gave all.

My contribution this week was about my great-grandmother, Margaret Priscilla Kingery Johnson, and has a few tips about researching common names.