“The Little Drummer Boy” seems to be one of those songs that you either love or hate. (I’ll be up front with you — it’s one of my favorite Christmas songs. Except the Pentatonix version. That one… not so much.) No matter how you feel about the song, I think there is an important genealogical lesson we can take away from it: Don’t read into a record things that aren’t there.

Some of the arguments that I’ve heard against “The Little Drummer Boy” revolve around the song’s setting. Mary and baby Jesus were still in the stable and the little drummer boy plays his drum as a gift for the baby. If we read the song’s lyrics, we can get a better understanding of what was going on. Here are some common arguments and what the lyrics have to say:

What mother wants to listen to drumming right after giving birth?
Where does it say she had just given birth? Yes, she’s still in the stable (as evidenced by “the ox and lamb kept time”), but it could have been several hours or even the next day. (Plus, I’m guessing that Mary had more patience than most mothers, but I’ll stick to what’s in the lyrics.)

Why would a shepherd boy have a drum?
The song doesn’t say or even infer that he’s a shepherd. He’s identified only as “a poor boy.” (People arguing this point might be confusing the song lyrics with the story told in the Rankin/Bass tv special, where the Little Drummer Boy has a lamb. However, even in the tv show, he wasn’t a shepherd.) 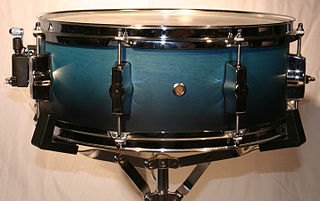 Seriously, I can’t get past this whole thing of drumming for a baby.
This is probably the most common argument. When we think of drumming, we tend to think of snare drums (like the one shown at right). They are usually played with drumsticks and tend to be rather loud.

But what do we know about the drummer boy? He’s poor. His drum is most likely a piece of hide stretched over a bowl or a short section of a hollow tree limb. The drummer boy is also little; chances are, his drum isn’t very big, either. In other words, this isn’t a drum that going to make him sound like Neil Peart. (If you’re not familiar with Neil Peart of Rush, or even if you are, watch this video beginning at the  3:15 mark.)

As for its appropriateness, Mary knew what she was getting into with this gift. (“Shall I play for you on my drum…  Mary nodded… “) And think about that for a moment. The drummer boy knew this was a gift that might not be well-received. He played his best. This doesn’t necessarily mean loud. (Ask a musician — playing softly is often much harder.) It obviously went well. (“Then He smiled at me…  me and my drum… “)

Honestly, having someone play a drum wasn’t on my top-10 list of things to receive when I had a newborn. But if we read the lyrics, we can get a better picture of the setting in which the Little Drummer Boy played for Mary and baby Jesus.

Which brings me back to genealogy. It’s easy to read something into a record something that isn’t there. Perhaps we are coloring it with our modern sensibilities. Perhaps we are jumping to conclusions that aren’t fully founded. Reading the record without reading too much into it will help your research.

You still might not like “The Little Drummer Boy,” but you can still apply the lesson of carefully reading a record and not reading things into it.