Most of our ancestors follow fairly predicable patterns. Then there’s the occasional ancestor who blows all of those patterns right out of the water. For me, that ancestor is my 3rd-great-grandmother Matilda Debolt.

So far, Matilda was right on track – get married and have a passel of kids. In May 1850, Matilda’s world came down around her. William became ill and died,2) William Skinner, 1850 mortality schedule, Reading Township, Perry County, Ohio, page 925. leaving her to raise the children. Matilda and the children are enumerated in Reading Township, Perry County, Ohio3)Matilda Skinner household, 1850 federal census (population schedule), page 353a, household 456, family 456. shortly after William’s death. It’s at this point that any resemblance of “normalcy” is gone.

William owned land at the time of his death, enough so that his estate needed to be administered and his children needed guardians. (Matilda, being female, did not have the legal standing to protect the legal rights of her own children.) The guardianship records revealed a tremendous amount of information not only about the children, but also about Matilda.

No death record or tombstone for Samuel Crossen (husband #2) has been found, nor have I found a divorce record for Samuel and Matilda.

If Matilda married Joseph Brown in 1859, she should be Matilda Brown on the 1860 census, right? You’d think so, but you’d be wrong. She appears as Matilda “Craven,” living with her daughter Amaretta and her family in Jay County, Indiana.6)Salathiel Skinner household, 1860 U.S. Census, Jay County, Indiana, p. 49, nos. 345/345. I suspect that “Craven” is actually “Crossen.” No other record has given Matilda’s surname as Craven.

She kept using Skinner in the 1880 census, when she was living in Pulaski Township, Williams County, Ohio.8)Matilda Skinner household, 1880 U.S. census, Pulaski Township, Williams County, Ohio, p. 627C, nos. 228/240. How do I know this Matilda is mine? Fortunately for me, a copy of the family Bible is on file at the Ohio Genealogical Society. In it, is this marriage record: 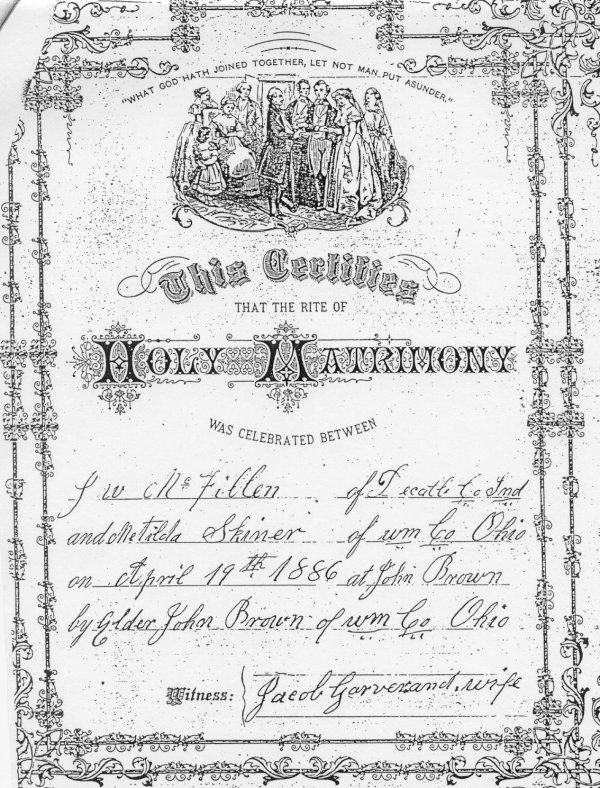 Yes, Matilda got married for a fourth time, this time to J. W. McFillen. (Even the civil marriage record names him as J.W.9)FamilySearch.org, Ohio, County Marriages, 1789-1997, J.W. McFillen/Matilda Skinner marriage, Williams County Marriage Record vol. 5., p. 280. Would it have killed them to give his name?!)

It is here that I lose Matilda’s trail. The only clue that I have for her after this is an SAR application that states that she died in Illinois in 1899.10)Ancestry.com., U.S., Sons of the American Revolution Membership Applications, 1889-1970, George De Nevin Skinner application, no. 91336, 1964. My next step is to follow her children and see if I can identify any who were living in Illinois in 1900 and start looking there.

Though the question I’ll have to ask myself as I search for Matilda after her 1886 marriage to J.W. McFillen is “What name is she using?” For all I know, J.W. wasn’t her last husband. Even if he was, she has a habit of reusing old surnames.

By the way, the only husband that I’ve been able to kill off (so to speak) is William Skinner (husband #1, for those who have lost track). What happened to the other 3?

Perhaps instead of “Waltzing Matilda,” I should call her “Matilda the Merry Widow.”