The year was 1978 and I was attending my first Ohio State football game. Because tickets for OSU home games were hard to come by even then, my family did what many Buckeye fans do — we went to Indiana. (Say what you will about the Hoosiers’ less-than-stellar football team, but their stadium is nice and the people there are super friendly.)

I don’t remember anything about the game itself (other than the fact that Ohio State won). But what happened at the end of halftime was something else. 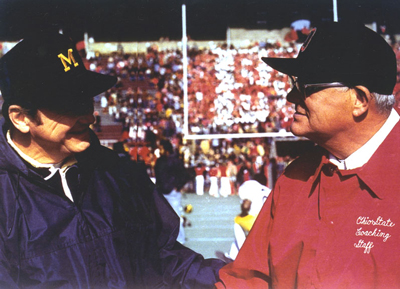 The bands had finished their shows and the teams had taken the field for their warm-ups before the 2nd half. Our seats were about 10 rows up on the 20-yard line, giving us a good view of the field and the sideline. Pacing the sideline was Woody Hayes, wearing his iconic black Block O ball cap.

As Woody was talking to one of the assistant coaches, a young man came out of nowhere, ran up to Woody, and grabbed the cap off of Woody’s head! The next thing you know, the kid ran across the field, through the football players, into the IU band… and was Never. Seen. Again.

What does this have to do with family history? Somewhere, there’s a middle-aged man with a black Ohio State cap, the kind with the Block O. And he’s told his kids about how he stole it right off of Woody Hayes’ head. His kids have rolled their eyes and said, “Yeah, right, Dad.” To those kids, I have this to say: Your dad is right. He stole that cap right off of Woody’s head. I saw him do it.