Martha Harris was married twice, each time to one of my 3rd-great-grandfathers. Her first marriage was to William Orr. After his death, she married John Starkey, himself a widower.

To quote Douglas Adams, “This is not her story.”

I’ve mused before about how strange/odd/unusual/funny/weird that it is that Martha married two of my ancestors. (And, yes, I’m also thankful that she didn’t have children with the second husband. That could have potentially made for a pretty awkward family tree.) Apparently, some wrinkle in my brain has been musing on this, too, because it suddenly hit me that it may not be all that odd. In fact, it might be perfectly logical.

Susan Orr was born in 1850, the daughter of William Orr and Martha Harris. She married George Skinner in Perry County, Ohio on 2 March 1869. Together, they had 10 children. Unlike George’s mother (the oft-married Matilda Debolt Skinner Crossen Brown McFillen) and most of George’s siblings, George and Susan stayed put in Perry County.

When you’re raising 10 kids, you need all of the help and support you can get. That help wouldn’t have come from George’s side of the family; they had scattered across Ohio, Indiana, Michigan, and Illinois. It stands to reason that Susan would have relied upon some assistance (even if only getting advice) from family nearby — including her mother.

When Martha Harris Orr married John Starkey, she didn’t just gain a husband — she gained several step-children. This also means that Susan gained several step-sisters and step-brothers, including my great-great-grandfather Peter Starkey. Since they were all living nearby, it seems logical that Susan would have interacted regularly not only with her mother, but also with her step-siblings.

Realizing this possible (even likely) family dynamic, it makes me wonder if that is how my great-grandparents met. Did Clara Skinner (daughter of Susan Orr Skinner) and Edward Starkey (son of Peter Starkey, Susan’s step-brother) meet at gatherings of the extended family? Is Susan actually the link between my Starkey line and my Orr line… and that it really isn’t odd that Martha was married to two of my ancestors, because in doing so, Susan’s children would have interacted with the children of her step-siblings. 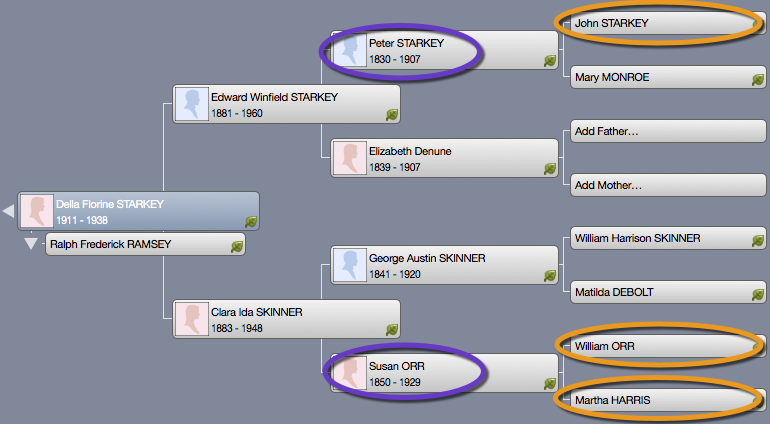 Ancestor charts are great ways to visualize our family trees. But they can also prevent us from seeing some relationships. When we look at an ancestor chart, we see our relationships to those who are listed. But sometimes it’s not about us. When the tree twists and turns, as it does in this case, we need to consider how those people relate to each other.