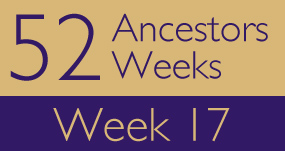 Our thoughts this week are certainly with the people who have been affected by the storms in the South. Not only is it a reminder of how unpredictable (and short) life can be, but it should also make us think about our own disaster preparedness. Yet more interviews in the wake of the storm with survivors saying, “My pictures are gone.”

Verybeth shares the story of her mother’s aunt who did what she could to preserve a bit of “Swiss German” heritage in Berne, Indiana and the grad student who took an interest in it. (And now I’m interested!) Schalene Dagutis shows how a clue pertaining to a birthplace led her to discover the identity of her “Mysterious Alice B.” How can I pass up highlighting Lorine McGinnis Schulze’s post, when the title contains the phrase “Axe-Wielding Neighbor“?

My contribution this week was one of my Quaker ancestors, my 4th-great-grandmother Rachel Moore of Sadsbury Monthly Meeting.