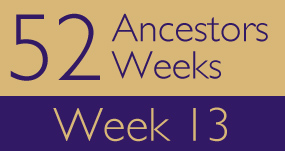 Passage to the Past has the incredible story of Charles Billings, “the Mayor of Framingham.” Wally Huskonen describes how he’s related to his wife (hint: it’s more than just being spouses). Dave Lucey highlighted not only his War of 1812 ancestor, Rodolphus Stanhope, but also the Preserve the Pensions project, which is working to digitize those valuable pension files.

My contribution this week was how I pieced together a theory of why James R. Steele, my 3rd-great-grandfather, left Washington, DC for Ohio.

Without further ado, here are this week’s posts: